Janet Teowarang reflects on the increased interest in sustainable fashion and methods that combine machine and hand weaving.

By 700 AD, horizontal and vertical looms could be found in Asia, Africa, and Europe. By 1177, the loom was improved in Moorish Spain with a stronger frame that rose higher off the ground. Now the weaver’s hands were free to pass the shuttle while operating the heddles by the feet, hence this type of loom became the standard European loom.

In Medieval Europe, weaving was done at home and sold at fairs. The craft spread and the guilds were established. The period of wars, famine and plague have shifted the manufacturing of fabrics from home to purpose-built centralised buildings.

Hand-weaving is also well adapted in the crossroads of the east and west region than Asia. However, we tend to think that hand-weaving textiles are mainly produced in the east. The industrial revolution switched weaving from hand to machine. In 1733, the English inventor John Kay created the flying shuttle and enabled the weaving of wider fabric in a faster time. The first factories for weaving were built in 1785. The jacquard loom was then invented in about 1803 and this could be programmed with punch cards, which enabled faster weaving of more complicated patterns. White fabrics were printed mechanically with natural dyes at first with synthetic dyes coming in the second half of the nineteenth century. 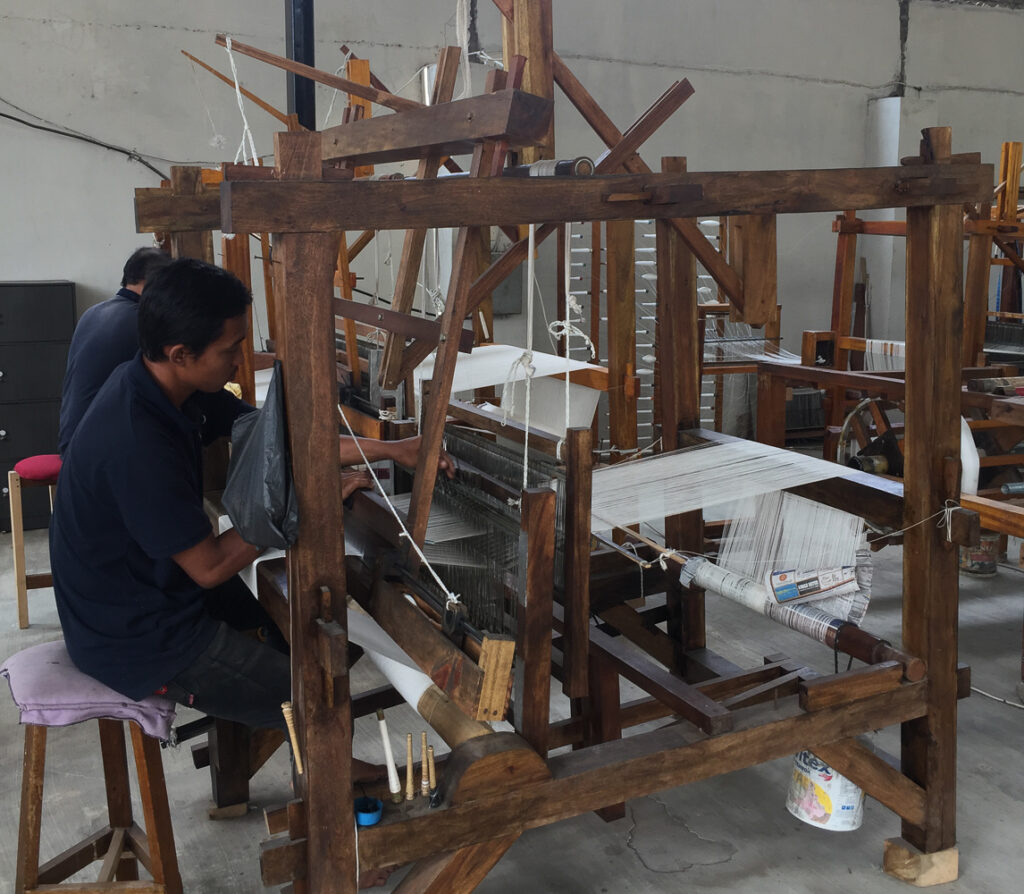 In 2018, when I visited Karangrejo tenun village in Pasuruan Regency, East Java, I realised how hand-weaving artisans struggle to compete with machine-made weaving of sarong textiles. Indonesians are very much familiar with sarong textiles as one of the staple clothing for villagers or even during praying at the Mosque. According to my conversation with Pak Mohammad Subhan, their village used to be known for its local makers who wove cloth in the 1990s.

On the other hand, technology has risen with the need for faster production for hand-weaving textiles. The local textile manufacturers in East Java started producing sarong cloths by hiring most hand-weaving artisans at nearby villages including Karangrejo. During that time the textile manufacturers were still managed both hand and machine-made. Then in the new millennium, machine-made was more popular than hand made. As a result, Karangrejo hand weaving artisans are producing mop cloth and mop refills just to survive because the demand for hand-made weaving cloth is relatively very low. From this case, I have learned to appreciate how the local wisdom of Indonesian textiles was disrupted by the influence of Western lifestyles. This was proven from the example of mass production of dobby or jacquard textiles for most fast fashion collections.

Now since the COVID-19 pandemic invaded last year, sustainable fashion is on track. There is now an appreciation of the function and durability of clothing accordingly, especially with the concept of working from home. As for Indonesians, we need to raise the awareness of our cultural sustainability among younger generations to help preserve the local wisdom. My role as a fashion industry player and lecturer has been essential to merge the artisan’s creations with my students, the Indonesian generation Z into a conscious course project.

Last semester from February to June 2021, I taught a Fashion and Sustainability course where I provided the opportunity for my students to integrate with the local sustainable fashion industry. My fashion brand Allegra Jane, with its sustainable concept collection Allegra Jane Rationale, also took part in this project. I have collaborated with my students Livia Sinarso, Sinta Hiu, and Shannon Gabriella to create multi-way comfortable, fashionable outerwear made from hand weaving TENCEL™ cloth by KaIND. Referring to KaIND, I have written about them on Garland #10 Kaya edition where there is a community at KaIND from non–artisan backgrounds for elevating their skills to produce high-quality hand weaving (tenun buatan tangan dari Alat Tenun Bukan Mesin/ ATBM) cloth in Purwosari, Pasuruan Regency, East Java. 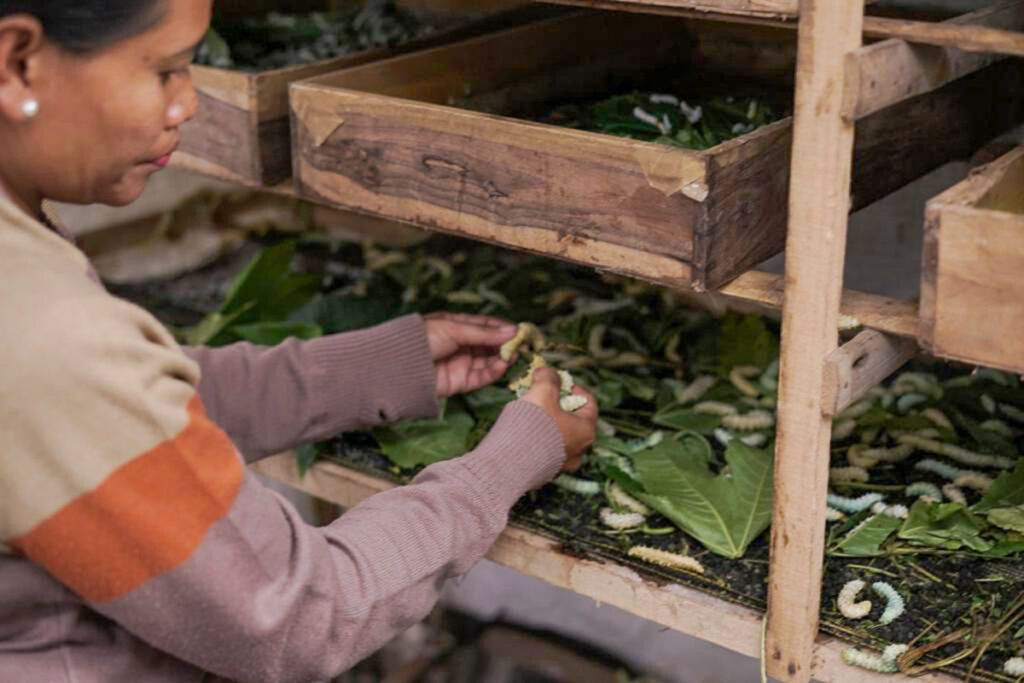 By the year 2019, KaIND has collaborated with 250 eri silk farmers in Malang, Pasuruan Regency, Mojokerto, and Tumpang mainly in East Java. However, the pandemic situation has caused much reduction of the farmers until now there are only 20 eri silk farmers. Learning from this condition, we decided to support the farmers by purchasing the hand-weaving cloth for our sustainable fashion project. Other than supporting local wisdom, we also applied the upcycling method by using the textile waste of sarong cloths by Marrakesh Gajah Duduk, one of the prominent textile manufacturers for sarong cloth. The textile waste of sarong cloths is from the Allegra Jane Spring Summer 2014 collection presented at Indonesia Fashion Week 2014 and in Busan, South Korea runway where I have kept the leftover textiles for years instead of throwing them into landfills. 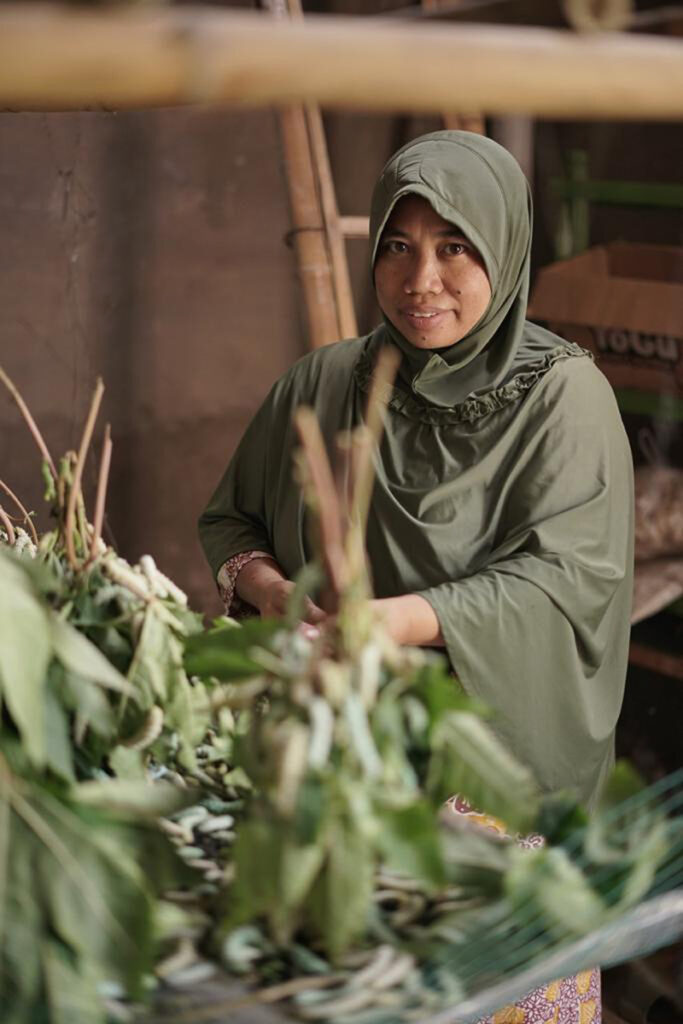 Through this chance, we have integrated hand and machine weaving to support eri silk farmers and upcycling textile waste into adaptable sustainable fashion products. We have created a multi-way kimono style outer with additional accessories such as detachable front vests, waistbands, face mask, sleeping mask, and clutch from the sarong textile leftover. We would say “adapted” because the outer is easily combined with all additional pieces and any basic fashion pieces into six new looks for staying at home or outside preferences. With our contribution and collaboration, we are hoping to raise awareness of our sustainable fashion project in western countries. The main reasons are to empower local wisdom by facilitating the eri silk farmer’s productivity in silkworm cultivation and to improve hand weaving artisan’s productive capacity during pandemic and post-pandemic economic recovery. 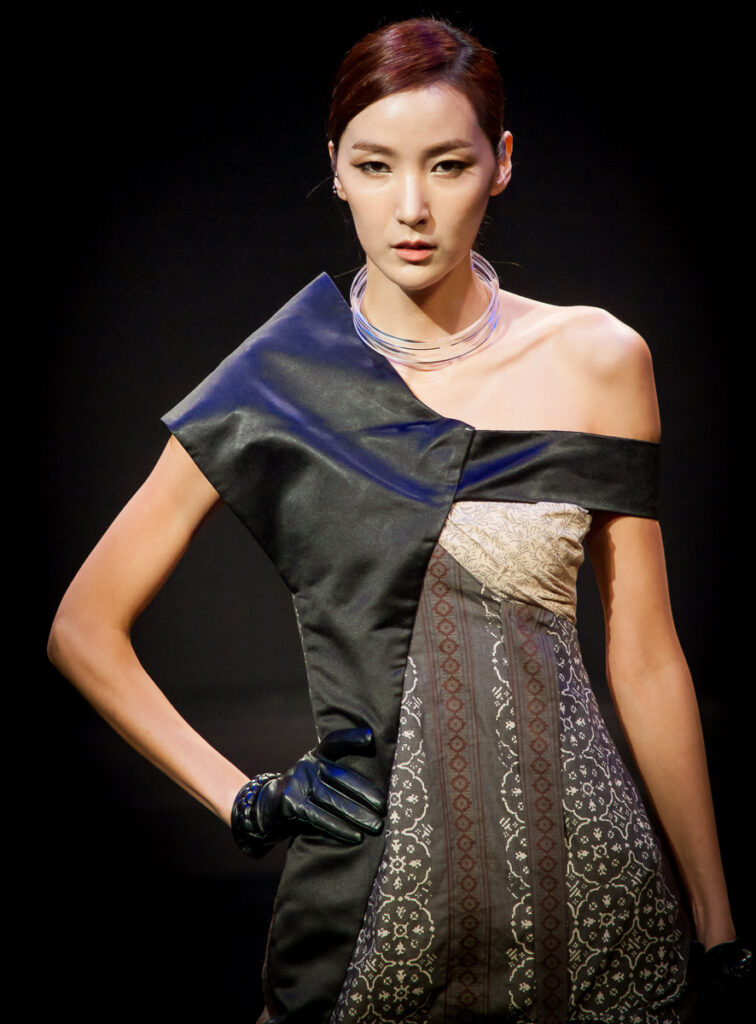